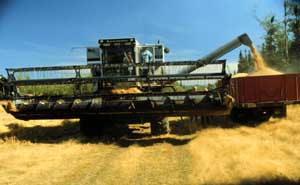 Agriculture in the Delta area began during the Gold Rush period to fulfill a need of food for workmen and hay for horses and other livestock.

No other significant agricultural development occurred in the area until the 1950s when several homesteads were established in the Clearwater area. Through the perseverance of these hard-working people, the viability of agriculture in the Delta-Clearwater region was proven.

In the early 1970s, a large scale commercial farming venture was established. Though beset by a multitude of problems – including limited or non-existent markets for production, difficulties in obtaining needed production sup-plies and the ever-present wildlife depredations. This farm did demonstrate the potential for local grain and forage production. It was partially due to theses efforts that Delta-Clearwater was chosen as the location for Alaska’s first large-scale agricultural project. 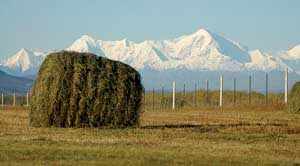 Hayfield on Nistler Road with Mt. Hayes in the background. Photo by Seth Sutherland

Along with two large agricultural projects, the Delta area also has many small farms. In several different land sales, over 100 parcels were sold in the Tanana Loop and Delta-Clearwater areas. These farms ranged from 20 to 320 acres in size. The infrastructure created to service the larger farms also serves these new farms and several older farms which were homesteaded during the 50s and 60s. Smaller farms contribute to the general economy and are recognized as an important part of the agricultural picture.

Success of the Delta Agricultural Projects has been highly variable. The development of more than 80,000 acres of agricultural land is an accomplishment in itself. Farmers have adjusted their production techniques to make the most of Mother Nature’s short season by raising cereal grains such as barley and oats, grasses for forage and seed, certain hardy annual legumes, potatoes, vegetables and livestock. Bison, elk, European boar and reindeer ranching is currently under serious consideration.

The 1980s were plagued with periods of readjustment for national and international agricultural businesses. Declining oil prices have lowered the purchasing power of many nations and significantly reduced markets for American products. Many former foreign customers have successfully established production programs utilizing American technology and now compete for the limited markets 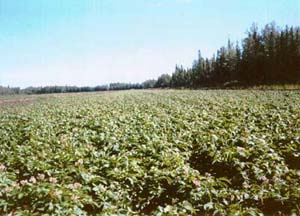 Although severely impacted by the current international agricultural situation, Delta area farmers continue to plan for the future expansion of the industry.
Opportunities in the production of finished beef, dairy beef and swine are strong possibilities. Our local dairy processor could expand the available markets if more milk was available. Processing facilities could open new markets for local vegetable and berry production – Various types of game ranching may also have an economic future in Alaska’s agriculture. Opportunities do exist for Delta farmers.

One might wonder how much agricultural production can be utilized in Alaska’s effort to become self-sufficient. If Alaska were to produce 100 per cent of the beef, pork and milk currently consumed in the state, it would require full production on more than 600,000 acres. We have ample opportunity for expansion.
One of our local farmers of 3 generations offer a variety of products online.
Alaska Flour Company – They specialize in stone-ground, artisan barley products. You get 100% whole-grain goodness in every package of Alaska Flour Company product. Some of their  products include Brownie mix, Cream of Barley Cereal, Pancake mix, Chicken and Barley Couscous