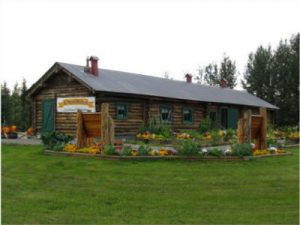 In the heart of Delta Junction sits a small log building, peacefully nestled among grass and wildflowers. It is the epitome of Alaskan idyllic. It’s a rather unassuming building. No neon signs no flags or banners just weathered logs and a warm and inviting feeling.

One’s first glimpse of the Sullivan Roadhouse Historical Museum tells nothing of its remarkable past and the epic journey yes journey that it took to get to its new home. It should be obvious by now that this is not the typically boring story of a museum coming to life. Rather this is a saga of an historical building that survived intact against overwhelming odds. It is nothing short of a miracle, and this story really should be titled To Live or Die on a Bombing Range.

Built in 1905, by Alaskan gold miners John and Florence Sullivan, the roadhouse was a very comfortable stop along a winter cut-off route on the newly cleared Valdez to Fairbanks Trail. It was big, warm and well appointed. Ma Sullivan made her guests feel right at home. Business was booming and the sod-roofed lodge was never empty. In the midst of this prosperity, fate dealt its first blow. The cut-off, in an attempt to be a shorter route, went straight over the top of several mountains. Many grades were too steep to pass and travelers began to forego the short cut for the flatter and easily traversed main trail.

The Alaska Road Commission was forced to remedy the situation and moved the winter cut-off around the steep grades. This re-routing took the trail 4 and 1/2 miles away from the Sullivan’s lodge. In order to stay in business, John and Florence had to get their roadhouse back on the trail. So, log-by-log they moved the original building back out on the trail. During the rebuilding, the Sullivan’s installed a metal roof, a rare site in the Interior of Alaska at that time. This metal roof would eventually turn out to be one of the roadhouse’s greatest assets. 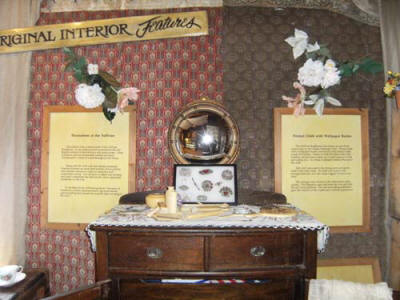 Once again business boomed and the Sullivan became known as one of the nicest stops on the trail. The log house was a favorite among travelers. Amid all of the success, fate again stepped in and by 1921 the cutoff was abandoned, as cars were regularly traveling the long distances between Valdez and Fairbanks on the wide and smooth main trail.

John and Florence left their roadhouse in 1923. They simply packed up a few personal belongings and moved to Fairbanks. The roadhouse sat abandoned for the next 20 years, visited only occasionally by hunters seeking shelter.

With world war breaking out in 1941, the government began building an Army base in the interior of Alaska. The military land grab included the abandoned roadhouse. Again, fate roared in as the old building was now sitting on the edge of the active use Oklahoma Bombing Range. Threats from stray ordinance and fire were constant, but against all odds the old log building hung on. Over the years, fire licked at its door many times, but the roadhouse had held its own in its battles with man and nature. Time had taken its toll on most of the other original sod roofed roadhouses and they had long since collapsed. Miraculously, the Sullivan was still standing. Although the military made improvements to the structure, the metal roof that had protected it from the elements for so long was beginning to fail. The old roadhouse was slowly dying. 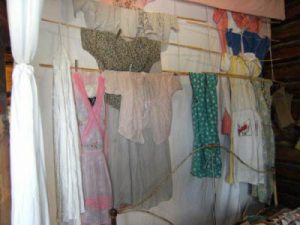 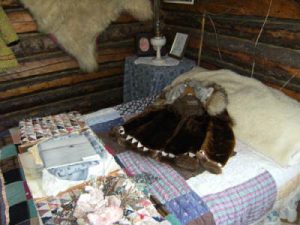 In the early 1970’s the Army ordered the site around the Sullivan cleaned up. A man was sent to clean up the site by bulldozing most of the artifacts left in and around the old roadhouse into a big hole that was to be filled in with dirt. However, he just couldn’t bring himself to bury the historical items, so he secretly hauled them out and stored them in his barn. The roadhouse now empty of her treasures sat alone in a harsh and unforgiving wilderness, slowly returning back into the earth.

Fortunately, local historians had other plans for this old log house. A congressional program to save historic buildings called the Army Legacy Fund stepped in. Its last project, before being felled by the budget ax, was to move the old roadhouse log by log in a helicopter to Delta Junction, where it was refurbished and covered with a new metal roof.

It was a wonderful opportunity for its new owners, the Delta Chamber of Commerce, to turn it into a museum for the public to enjoy. The desire was to showcase artifacts and antiques along with the history of the Valdez-Fairbanks Trail and the roadhouses that operated along its route.

Unfortunately, there were very few items original to the old building. That was until fate stepped in yet again. As the man, who wants to remain anonymous that more than twenty five years ago defied a direct order and saved the treasures at the original site of the roadhouse brought them out of a dusty corner of his barn and returned them to their rightful home for all to see. 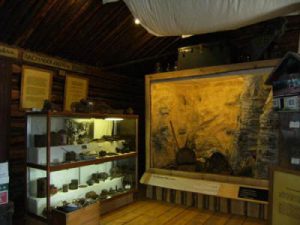 The Sullivan is now the oldest original roadhouse left in the interior of Alaska and houses the state’s premiere roadhouse museum with a large collection of historical artifacts and photographs.

Thank you for coming to Delta Junction and visiting “An Alaskan Treasure that Beat the Odds!” 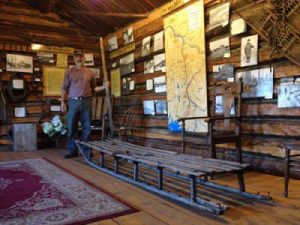 (Submitted by Christy Roden)  Dick MacEntire gave it to John Saunby in 1973, John used it for nearly 2 decades on his trap-line in the Alaska Range, in the area of the West Fork of the Little Delta.

John felt certain this sled was a part of the winter trail and likely made stops at the Sullivan’s during its operation. In the 1970’s and 80’s Saunby made stops at the original site of the abandoned roadhouse – which was used frequently by trappers, hunters and explorers prior to it (the roadhouse) being moved to Delta in the mid 1990’s.

John donated the sled to the Sullivan Roadhouse Museum August 2012, it’s seems fitting that it should be returned to a familiar landmark – in a sense “coming home”.

Mike Farrar and Paul Ashby hung it from the beams in the main salon that same day.

Thank you John, for the donation of this generous treasure.

Thank you Mike and Paul, for in securing it to its permanent place of the roadhouse history.